Have you ever read “Alexander and the Terrible, Horrible, No Good, Very Bad Day” by Judith Viorst? If you haven’t, I suggest you do. It’s a children’s book so it’s not a long read. And the next time you are having one of those days it will come to mind and somehow make things better.

Yesterday was one of those days for me. It started with waking up later than I wanted to. First, I hadn’t slept well. We have 24 hours of daylight right now which in itself isn’t much of a problem. Years of mushing have trained me to sleep whenever and wherever I can. But when it’s light out all the time when I wake up I can’t figure out what time it is, so I have to put my glasses on to read the clock. Yes, I will admit that squinting at the numbers doesn’t help anymore. Once I’ve done that, my body has done just enough activity, that it takes me a bit to fall back asleep. Yeah, I know, I’m weird like that.

This was after a night sleeping on the side of a mountain pass in the dog truck. The scene doesn’t fit this blog entry but the expression on my face certainly does!

So when I woke up yesterday and realized it was later than I wanted it to be I thought of my list and well, had an internal tantrum. Which of course didn’t exactly spur me on to greater things.

I’ve been a bit stressed lately (it will pass) and combine that with waking up late, rain (again), a dog fight in the house and no cream for my coffee and I began to creep towards a meltdown. Spud, who is a serious lump of a dog and Candle, who is lower than low on the totem pole, fought over who was going to lay at my feet. Yeah, there’s a world changer!

I thought a trip to town would do me some good. Wrong. Construction. Long waits. Hot, sticky weather. No air conditioning. And no I’m not done whining yet!

After running a few errands which included getting half and half, I arrived back home. I changed into my work clothes which at this point are capable of standing up on their own and headed out for some time with the animals. That always makes me feel better. Wrong again.

Pudge, a beautiful little fat pup, had broken her snap and was running rampant in the dog yard. As I was heading down there, Sasha, my sweet little pet dog and surrogate mama for sick and orphaned pups, leaped over the kennel fence and headed for the chicken pen.

Sasha. I still love her.

I knew Pudge would be safe with the big dogs in the yard so I chased Sasha. And here’s how it went down.

She ran around the pen. I ran around the pen chasing her. A chicken stuck her head out the fence, presumably to get away and Sasha ripped her head off. Another chicken flew over the fence and Sasha leaped up, grabbed it, shook it and dropped it. The third chicken thought it would be a good idea to try the same thing. Nope, not such a good idea. My prized white Ameraucana took off for the woods with Sasha hot on her heels and me hot on Sasha’s heels. Might I add that the air was blue with the flurry of expletives I had let loose.

Later as I went for a walk, the Mennonite family across the road cast me dirty looks. I didn’t know Mennonites were allowed to do that.

After less than two minutes three chickens were dead and one was MIA. Sasha is now tied to a tree.

People warned me that sled dogs and chickens don’t mix. Yeah well Sasha is not a sled dog. She is however a bad dog. In retrospect perhaps she has finally become even with me for what I did to her last summer. Let me add it was necessary because of the mats in her fur!

This is Sasha before. 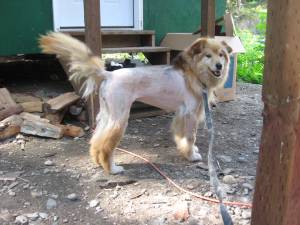 And well, here she is after. People. even strangers, started calling her Mufasa. It did grow back in!

So last night as I was reflecting on my terrible, no good, very bad day I pulled out another favorite. “Love you Forever” by Robert Munsch. And I thought of all the people who love me and who I love. And you know, the day wasn’t so bad.

P.S. My little white chicken showed up this morning. She must have been hiding in the woods.