The chickens, the fox and the bear – oh my!

I know my promise was to post something yesterday but my first word when I opened my eyes was “ugh”. Okay, maybe that wasn’t quite the word but let’s move on shall we? My head hurt, it felt like sand was behind my eyelids, my throat hurt and that was just the body part above my shoulders. I made the wise decision to do my best impression of a lump. Today is better.

So….Darrel and I talked and figured out a new coop/hen house plan. I was happy. He wasn’t and came up with a new design – in his head. I had started to work from what we had talked about when he walked by and asked me what I was doing.

“Why I’m working on securing the coop,” I replied cheerfully. (I may be embellishing a bit here.)

It was then that Darrel told me that I was doing it wrong and that was not the new, new plan we had discussed. Um, okay. He insisted he told me about the most recent design. I insisted that he hadn’t and yet again had a conversation with me in his head. And well, we both had to go to our corners.

We seem to be doing that more frequently. I tell him something. He says I didn’t. He tells me something. I insist he hasn’t. Maybe we need to start a serious vitamin regimen that boosts brain power!

Anyway, the new coop plan involved dragging an small building from our property next door to our place here. It’s 8 feet long, 4 feet wide and 8 feet tall. And it weighs a million lbs. First we lifted the bottom and tilted it forward. Then Darrel backed the truck up and the next step was to lift it further so it slid into the bed of the pick-up. Did I mention how heavy it is?

Then we drove over to our place and Darrel started the process of backing up on the path to the dog yard. It’s packed dirt and barely wide enough for the truck. About halfway down the path is where the chicken yard is. I tried to direct him and he started waving his hands. Of course I had no idea what he was saying, so he opened the door and in an exasperated tone told me to lock the hubs on the truck. Ah, of course that was what all the weird hand gyrations meant. Duh.

We slid the building off the truck and the whole time I am picturing us being squished underneath it. Then my love said to me, “okay let’s just walk it over to the yard.” I looked for something to throw at him. Why is it men always want to do things with brute force? I already know how strong Darrel is. And thank goodness he married someone like me who can lift all manner of heavy crap. 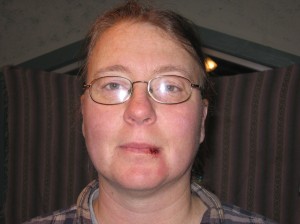 We thought it would be a good idea a few years ago to lift Darrel’s 400 lb tool box into the truck. Well the corner of it caught my lip but I didn’t drop my end!

I was definitely not going to lift that building again and mentioned that we have a nice ATV with a winch that needed some exercise. With a little bit of maneuvering we got the building where it needed to be. It requires some work to make it secure but it’s going to be awesome!

Now of course the pen needs to be expanded so the chickens have more room to wander around through the day. That is a whole other plan we have discussed. However I won’t be working on it just yet because I know there is a new one percolating in Darrel’s head. Today though we will be finishing up that project so he better think quick!

The four older chickens got moved into the shed with the younger chicks who are still in the brooder box. They have been taunting each other through the wire. The nice part is that the younger ones are standards and so are almost as big as the four bantams. Hopefully we will avoid poultry gang fights.

The fox has been seen but not caught. Actually it’s foxes. A black one with a white tip on its tail, a small reddish brown one and a red one. And there are more. I ran into a friend walking his dogs on our section line and he said every day he sees foxes and his dogs always want to play with them. Gee that’s great news! The first year I decide to have chickens the fox population is at an all time high!

That would explain why rabbit hunting has been a bit sparse. Since the fox ate my chickens I thought I could return the favor and eat his rabbits! I’m using an old .22 that belonged to Darrel’s mom. I’ve been toying with the idea of a new one so we went to the gun shop a couple of days ago. Big mistake. Now I am coveting this nice little Ruger 10/22 with neon sights.

I get asked a lot about how I feel when I lose animals to other animals. First, it doesn’t happen all that often. The bottom line is that while we live in a rural area with some amenities, this is still the wilderness. There are bears, wolves, foxes and wolverines to name a few of the land-based creatures. In the air are the ravens, hawks and the occasional eagle. The moose will wander through a garden like it’s a giant buffet.

A few years ago the snow cover was really thin which meant the moose were able to run from the wolves. So the hungry wolves started killing dogs. We didn’t lose any of ours but I have friends who did. There was a town meeting at the community church and it kind of reminded me of early witch hunts. The whole “the only good wolf is a dead wolf” kind of thing.

I can’t blame people. Wolves are silent killers where dogs are concerned. They can sneak into a yard and pull the dog right out of its collar. And you wake up to nothing. Darrel and I started peeing around the perimeter of the dog yard hoping the human scent would give these creatures pause. I don’t know if it actually worked but by the time the real snow finally came and moose was once again back on the wolves’ menu, we still had all our dogs.

When I lived at the remote fly-in lodge a grizzly bear killed Voodoo, one of my silly old dogs. It was a hot, smokey summer and the berries were not doing so well. Voodoo was about 11 then and she had free run of the dog yard. I had gone to bed and just started to doze off when all the dogs went crazy.

Caleb, my border collie cross, was at the door when I opened it. He was terrified. But then the dogs got really quiet so I figured that a moose had been around and Caleb got a little too close to it.

The next morning I gave the dogs their breakfast but Voodoo wasn’t there. Now that was weird because that dog never missed a meal. At dinner time she still wasn’t around and I began to worry in earnest. When she didn’t show the next morning I started to look for her. Just down the trail from the yard I found her bloodied collar. A little further on was a large pile of bear poop. Just beyond that were bits of organs and more bear poop. Poor Voodoo was gone.

I was upset of course. She was such a good dog. She had grown goofy in her old age but had always possessed a heart of a lion. I bet she challenged the bear and had lost. I couldn’t blame the bear. He was hungry and a meal presented itself.

I slept in the dog yard for more than a week with a shotgun and rifle. I wasn’t going to lose anymore dogs. The rain came, the berries returned and I never did see that bear again.

The wilderness is a beautiful place. It will teach you amazing things about life. About the order of things. About yourself. But some of those lessons are hard. An ugly. If you can comes to grips with that, you’ll have a home you’ll never want to leave. 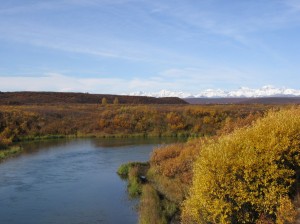 One of the best salmon fishing areas!

P.S. I thought I’d save pictures of the new coop in progress for the next post. Kind of like a grand unveiling. Except of course without the wine and cheese!