A miracle of epic proportions

A miracle of epic proportions is happening here. Are you ready for it? This is it:

Zucchini! Something is growing in my garden!

Now you probably weren’t knocked down with that photo but let me help you understand. I have not ever claimed to have a green thumb. As a matter of fact I have the opposite of a green thumb. I wonder what color that would be?

In an effort to expand my self sufficiency skills I made the decision to raise chickens and have a garden this summer. I had visions of eggs in my head. Farm fresh organic eggs. And since I don’t want my cholesterol to be in the thousands my plan was to set up a little stand here and sell the eggs. On an honor system. Basically if you can afford it put money in the box. If you can’t then take some eggs and pay it forward.

There are a lot of struggling families in this neck of the woods. Times are tough. Darrel and I have struggled pretty hard this summer money wise. What with losing his job, me trying to make some sort of income with writing (so far zero) and starting a new business we’ve been robbing Peter to pay Paul a lot. I’m not whining. That’s just our reality right now. I am thankful we don’t have children to feed. Like the family with six children across the road. Living in the vacant general store parking lot. In a school bus and a tent.

If you’ve been following this blog you are privy to how well the poultry raising efforts have gone. Rest assured the second batch of chickens are thriving and the fox hasn’t been seen. But the bottom line is that it will be a while yet before we have eggs. 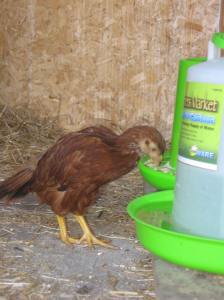 Gump is my smallest Rhode Island Red hen in the making. She likes to run in circles like our Gump dog. Weird but happy little bird.

My other dream for this summer was to have a garden full of fresh vegetables. More than we could eat. Now last year I attempted to grow chives and tomatoes. For a brief and shining moment my tray of chives took off, like a Chia pet on steroids. And then they died. Just simply and suddenly died. Friends would shake their heads in disbelief and mutter “who kills chives?” Well I do. There I said it. I kill chives. And tomatoes.

I bought one of those Topsy Turvy things. It guaranteed that anyone could raise beautiful, tasty, juicy tomatoes. Liar! Liar! The plants grew and just when things were looking good they died. Sigh.

Now I can mention that Darrel guffawed when I declared I was going to have a garden this summer. He revisited the chive and tomato incidents. I wasn’t going to be deterred though. I ordered heirloom seeds, carefully planted seeds in little starter trays and waited. Then stuff started growing. And growing. My home began to look like a greenhouse. Despite my earlier trauma I began to think that maybe I could grow something.

Now I have plants all over the place. Raised beds. Single pots. I love working in the dirt. It all smells so good. And then it happened. Zucchini! I have one little zucchini growing in my garden. And where there is one there just has to be more on the way!

Every gardener has his or her challenge. Around here there are many. Frozen soil. Frost in August. Bugs. Birds. But the biggest, both figuratively and literally, is the moose. Most folks either have a greenhouse or install electrified wires. I can’t afford either. So here’s my solution. Call it redneck problem solving. 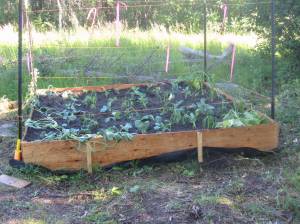 So if you were a moose would you think the string was electrified? The right answer by the way is yes.

Yup that’s orange string with pink flagging tape. We’re pretending it’s electrified. I hope the moose have been conditioned to other gardens where they have the real deal and they’ll be fooled by my set up. Basically I am counting on the moose being as dumb as they look.

Back to the chickens. The four survivors from the first group consist of three roosters and one hen. Two of them have names. Rudy, a Wyandotte, has found his voice. He’s pretty good too although he makes this weird little noise at the end. It kind of sounds like a kitten. 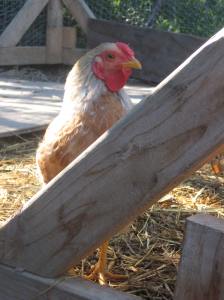 The other is Randy, an Orpington, who can kind of crow but sounds more like he is coughing up something nasty. His name reflects who he is – randy. He chases the hens around like a hormonal middle school boy. The girls of course are less than impressed. I wonder if he will ever realize that as a bantam he will soon be outsized by my standard hens? Probably not.

3 Responses to A miracle of epic proportions