Who does the training?

Mornings are pretty routine around here mostly because I need coffee. I don’t drink a lot of life’s nectar. Usually two or three cups at the most. And I like strong coffee which is really hard to get here in the U.S. Darrel calls the way I make the brew Canadian coffee. I call his weak crap American. You can feel the love can’t you?

I get up first which means I make the coffee. Sometimes he tries to be sneaky by setting it all up the night before and putting it on a timer – about an hour before I would even think of opening my eyes. He says he does it because he loves me. Yeah right.

Most mornings though I get up and go to the kitchen and get the coffee rolling. The inside dogs – Colonel, Candle, Spud and usually one of the outside mutts – are barking and dancing at the door, waiting to go out.

I open the door and let them all out. Except for Candle. He’s kinda special and needs to stay on a leash otherwise he bounces off to who knows where and we spend hours looking for him.

Candle. He is my shadow and follows me everywhere. He has bad hips and has adjusted his gait so that when he runs he bounces like an antelope.

Colonel is old. He’s deaf. And really needs his nails trimmed because he has entered that stage of dog life that I call “keep moving so they don’t think you’re dead.” My experience has been that old huskies are restless dogs. They pace a lot. So Colonel usually starts his exercise routine about 5 a.m. and I lay awake hearing clip, clip, clip up and down the hall.

Then around 6 a.m. he’ll stand in the doorway of the bedroom and pant. Sometimes a soft whine will accompany the heavy breathing. Aaargh. Then more clip, clip, clip.

Finally I get up and he starts his barking. He had a large tumor on his neck removed last summer and his “voice” sounds more and more like a 2-pack a day smoker. 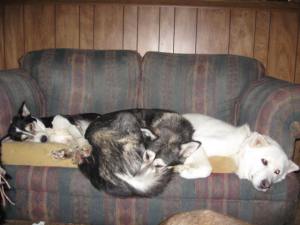 Colonel is on the right. That’s his spot. We have a new “dog couch” and he sleeps in the same spot.

Anyway, I let them out. Colonel suddenly becomes this puppy who makes three to four laps around the yard and then back to the door. He forgets to pee or poop. Spud heads off into the fireweed and pees like a girl. He must have had to go really bad this morning because his eyes were half-closed. Then he trots around a bit and takes a dump. And then he usually goes to the door.

Not this morning though. Oh no. Spud suddenly lost his hearing and decided to visit all the other dogs. He approached the chickens. They moved and clucked and he remembered about his last visit with these birds of prey (yes you and I realize they are just chickens). He got really close once and they clucked and flapped and he almost died of fright.

Candle is put on a chain so he can take care of business. And the outside dog is tied up to his/her spot.

Every morning I remind Colonel to go pee. He looks at me like, “Oh yeah. Thanks!” Then I round them all up and get them back into the house.

When we got back inside this morning Nature called me up. So there I was. Sitting and well, you know. The door is suddenly nudged open and all three dogs stand there and stare at me. I suddenly had performance anxiety.

What I had neglected to do was finish our morning routine and they weren’t happy. There was no use in shutting the door because they’d just stand there and breath heavily and whine. Good grief!

Usually what happens is that once we are back inside I fill up a big bowl of water. Then I grab the dog food container and put a small pile of kibbles down for each dog in each of their “areas.” One day I put the little treats in different places and they refused to eat them.

This morning I finally finished the dog duties after the short interruption and then filled my coffee cup. And that’s when it happened. I realized that I have been trained by the dogs. 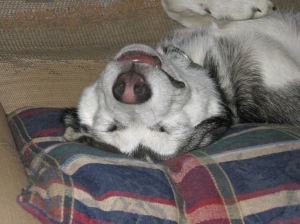 Spud thinks this is really funny!

3 Responses to Who does the training?