Well I’m back. Can’t believe it’s been four months since I last wrote. Writing is good for the soul but when your downhearted it’s difficult to write. Quite a dilemma actually. But I’m feeling pretty good and thought I’d catch up. Call it a blog post about my summer “vacation.”

School let out May 23rd which meant that for 12 whole weeks, until August 21, no teenager would whine, roll their eyes, stamp their feet, say “whatever” or call me names. Ah, sweet bliss. However, I have to admit I do miss them! I was mugged the other day by three boys in the grocery store and my only warning was a loud “Miss Peg!” about a nanosecond before being engulfed in the group hug.

I have a summer gig mowing lawns and weed whacking for the very school district I work for during the rest of the year. Outside work, dirt and grease agree with me so I really like that part of the job. What the ad failed to mention is that the powers that be decided each 2-person crew would be entirely responsible for the grounds at seven schools. Up until this year the mowing crew has only had to take care of sports fields which is a job in itself. The custodians were responsible for the grass around the buildings. Not this year. We do it all which triples the amount of work.

Now I bet you are thinking that they increased the number of mowing crews right? Wrong. Oh yes, and the grass needs to be cut to 3 inches. Yup. And there is actually a big boss who drives around with a ruler and measures it. Hmmmm – how do I get that job?

My mowing partner is Jessie and let me tell you – despite the frustrations I have never laughed so much in all my life. Here she is loading the ancient mower we are using now because the other one is broken and waiting on parts. A brand new machine was also ordered for us and shipped but apparently nobody has a tracking number. Who spends $10,000 and doesn’t ask for a way to track the shipment? 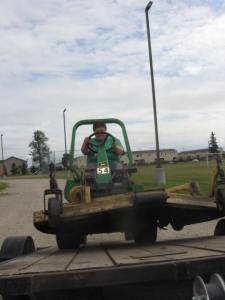 A week into the job I broke some ribs. I’d like to say I rolled a machine or something equally dramatic but the truth is that I have had a violent cough. I don’t think I have ever experienced anything quite as painful. I actually cried with the pain and have never whimpered over other broken, torn or sprained things. I took a week and a bit off and then eased back into work. Thank goodness for Vicodin! The worst part, other than the pain, was the way the bones would grind and clunk with every breath. It grossed me out! I am not completely healed yet but am feeling much better.

Those of you who have followed this blog know that I tried gardening last year. There were big dreams of canning vegetables in the fall. Yeah right. I am not easily deterred so I tried again this year. And along came the aphids. Sigh. So I bought ladybugs (1,500 to a container), wetted the leaves of the plants, waited until this evening and carefully put the ladybugs at the stem of each plant. The directions said to wait until the evening when it’s darker so that they will settle in and not fly away. Good advice except we have almost 24 hours of daylight right now. So I waited for some dark and angry cloud cover to come floating over. Here’s hoping it helps.

I enjoy gardening even though I am pretty sure I am the worst one ever. It’s peaceful. Here’s proof of how bad I am. That yellow thing on the right is supposed to be a squash. I have seen baby corn that is bigger! I will hold out hope for the potato – they are flowering at least!