I like feeding our dogs; especially this time of year. It’s dark and I work in the beam of a headlamp. There is just something about the crunch of snow underfoot, the breath of barking dogs that hangs in the air and at times, the Northern Lights dancing overhead, that has me wishing it all could be captured somehow for everyone to see. As I move from dog to dog I am greeted with tapping, excited feet and a “woof” or “woooooooooo.” Hearing them slurp and gulp and snarf their warm, nutritious meal makes my heart glad. 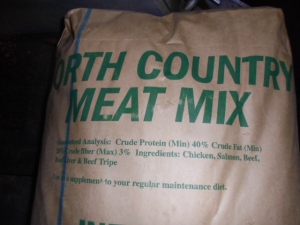 We buy 50 lb blocks of meat to use as snacks for the dogs. Yummy!!! 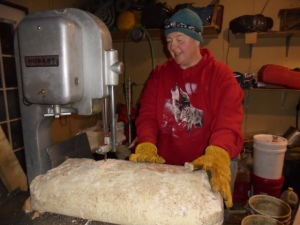 A band saw is a musher’s best friend!

Tonight my ears tuned into the dogs around me. Glacier who is physically an intimidating giant, but is in truth the biggest baby I have ever had, gets fed first. After he eats, he spends the rest of the time whining and carrying on about how he is STILL starving (Yeah he gets almost twice as much as every other dog because of his size.)

Nodd, who adopted me about 13 years ago, barks once or twice but that’s it. She came from a neglectful situation and I think she learned early not to draw attention to herself because there were always consequences.

Off on the other side of the yard, I can hear old Peanut barking at her bowl, stomping her front feet into it and then tossing it in the air. I think she is convinced that this is how the food shows up.

Some of those barks are echoes of generations. Daisy, Pepe, Hippy and Scoot all sound like their dad and grandpa Trophy. Listening to them a person might be convinced we have hunting hounds and not sled dogs. 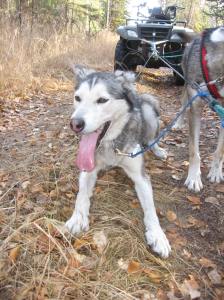 Daisy taking a break on a fall run. Experienced sled dogs learn to just relax during our breaks.

Hiccup spends her wait time growling at any other dog who even looks her way. Like her sister Bob, now gone, she is quite convinced that there is a canine conspiracy to steal her food and so she initiates a preemptive strike. Silly girl. 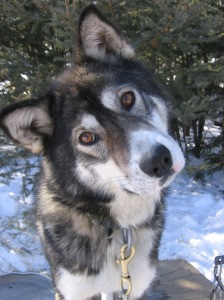 Bob – I miss this silly girl.

Beaker and Blue, who are young sisters, don’t bark. They scream. Molar loosening screams. Their grandfather, Zen, who was very un-Zen-like, made the same grating sound. These two are crazy, happy dogs, but the noise – oh my. I try to feed them as quickly as I can!

Tyson, aka, Buckaroo, well, bucks. It’s the funniest thing I have ever seen a dog do. In the dark what you hear is, “thump, thump, thump” as he lands on the ground. Then there are the quiet dogs – senior citizens who understand the food bucket comes by pretty much on time and there is no need to worry. Charlie, Gump and Blackie all just chill and wait. Blackie sometimes doesn’t even get out of his warm, straw-filled house until I am filling his food pan. 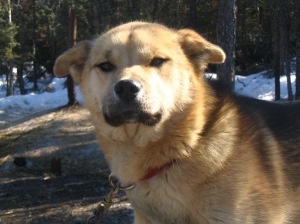 Charlie sort of looks like Jeff Dunham’s Walter doesn’t he?

One sound I have been missing a lot is the “woo woo” from Diablo. She died this summer because of a brain tumor. We had a ton of adventures she and I – living in the bush, working on glaciers, following a caribou herd on migration and traveling on historical trails. I miss her a lot and I think even more so, because her area remains empty. Maybe it’s time to move some dogs around. She will never be forgotten but her spirit was adventure and I don’t think she’d mind. 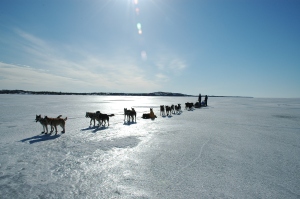 Our last expedition in Canada before moving to Alaska. (photo courtesy of my friend James)