Old Dogs But No Watermelon Wine

This is the sound of Oni tappy-toeing up and down the hall every night, about 5 minutes after I’ve gone to bed. Soon the noise is in stereo, because Gump has joined her. The tapping is only broken when Oni makes a pass by me and rams her unusually pointy nose into my ribs and Gump roughly rubs his head and face all over my leg. I will scratch Oni’s head and back for a few minutes, then push her and Gump gently away. The tappy, tappy, tappy fades as they pace down the hall, only to intensify as they come back. Back and forth. Back and forth. This night time ritual lasts about 10-15 minutes whether I scold them or not, so I use the time to practice meditation.

Oni and Gump are old sled dogs living out their remaining time lounging on the couch during the day and tap dancing at night. 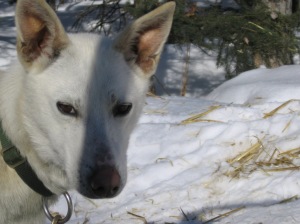 Oni, not long after I got her. The distrust is obvious.

Fifteen-year-old Oni was a very poorly socialized rescue who stomped into my life when she was just over a year old. It took several years before she didn’t panic any time we touched her. She is on the small size, with horrible confirmation, but her work ethic is giant. Being in harness and pulling a sled was where she found her joy and where her life was good and fair. She has easily out pulled and out worked any dog I’ve ever known.

Oni and Loup on a short run. Loup is a huge Malamute and Oni looked pretty small next to him!

Oni was part of the crew we would bring to Juneau to work on the glaciers, or on land, giving rides to tourists. She was a great traveler, content to be in the dog box on the truck, and only woken to eat, pee or run. The first summer we were hopeful that exposure to people and the daily life of a very large dogyard, would aid in transitioning her to trust people more. Yeah, it didn’t work at all. Eat. Sleep. Work. That is all she was interested in.

One afternoon she got away from one of the staff. With the noise of 250 dogs and 25 people living and working on the glacier, and hundreds of tourists flying in and out on the choppers, it was going to prove an almost impossible task to catch her. Glaciers are very dangerous places and the camp, dogyard and trail were on very stable snow and ice, away from killer crevasses. Thankfully some bad weather rolled in and choppers were grounded in town.

The beautiful view you see flying to the camp on the glacier.

We noticed that Oni had found our tent and wanted to hang out near the door. We placed an airline kennel just inside and put some food right in the back of it. I rigged up a long piece of rope from the door to our bed at the rear of the tent and waited for her to take the bait. She knew I was up to something, but she also knew her stomach was growling. Soon enough her hunger trumped her cautiousness and she ever so slowly crept into the front of the kennel.

I held my breath and forced myself to wait. She crept in and out a few times, frustrated that she would need to commit her whole body to going into the kennel in order to get the food. Finally she crept in, grabbed a mouthful of food and turned around in a flash, intent on a swift getaway. I was faster however and I yanked on my string, closing the door behind her. I had to reel in the line, keeping it tight so that she couldn’t push against the unlatched door. With a great relief, I locked the kennel door and Oni resigned herself to her sudden captivity with a sigh and then finished the food and fell asleep.

A few years ago we had a pretty long stretch of harsh, 40 and 50 below weather and it was obvious she was having a hard time being outside. We brought her into the house where she was warm, but miserable and on edge all the time. The lack of early handling and socialization made her wound tight like a coil and she was ready to flee if we walked too close to her. It was the other house dogs that taught her we weren’t so bad and after a time she began to relax. 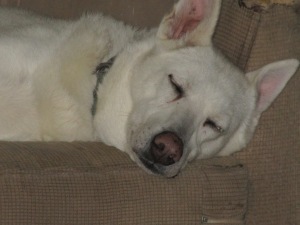 Oni sleeping peacefully in her spot on the dog couch.

About a year after moving into the house and securing her spot on the dog couch, Oni had undergone a remarkable transformation. She initiated contact with us. She wouldn’t startle anymore when we walked by the couch. And she had begun to play with puppies or a young dog who came into visit. Oni had been completely isolated as a barely weaned pup and the plan had been to put her down as soon as her then owner could do it. Months went by. She was kept alone, away from her siblings and as a result didn’t learn how to play. I had caught wind of her situation through the grapevine and it was a no brainer to take her in. Her play was stilted and awkward, but it was a joy to see.

One of Oni’s physical issues is that her tail is completely fused, except for the very end. While most dogs can wag their tails, she can’t and so if you want to figure out if she’s having a good time, you have to really pay attention. As she learned how to play, the tip of that fused tail, would wag furiously. Just the very tip. I laugh every time I see it.

The most significant change for us was that Oni could go for a walk with the other geriatrics and, ready for this…….be off-leash with an excellent recall. Our frightened little white shadow wanted to be with her people. And today she really wants to be with us, particularly at 2 o’clock in the morning. Sigh.

Oni will continue to lounge on the couch and tap dance up and down the hall until the end of her days. She has a certain stiffness in her left leg but it doesn’t stop her from being a part of the dancing duo.

Very soon I will introduce you to another of our seniors living in the retirement home we apparently are running for old dogs. 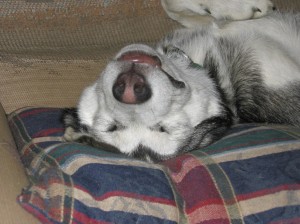 This entry was posted in Uncategorized and tagged Alaska, Iditarod, sled dogs, spud. Bookmark the permalink.